'Even though we were down 3 starters, we always talk about the next man stepping up,' head coach Jay Hosack said. 'I couldn't be more proud of our boys and how much they just flat out competed tonight.'" 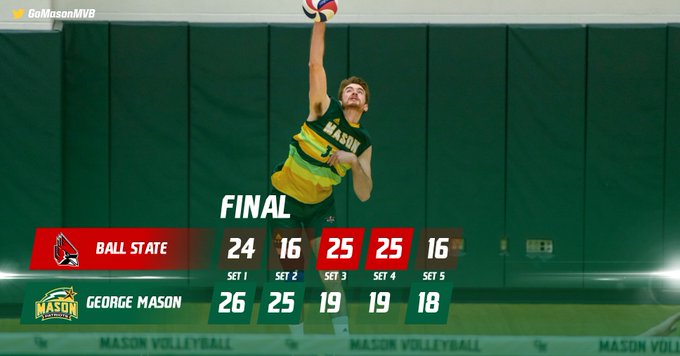 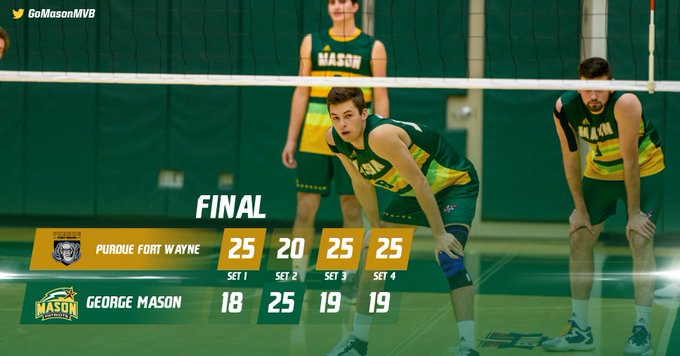 Mason remains #12 in the country:

No. 12 Mason falls to No. 6 Lewis in three sets. #WeAreMason 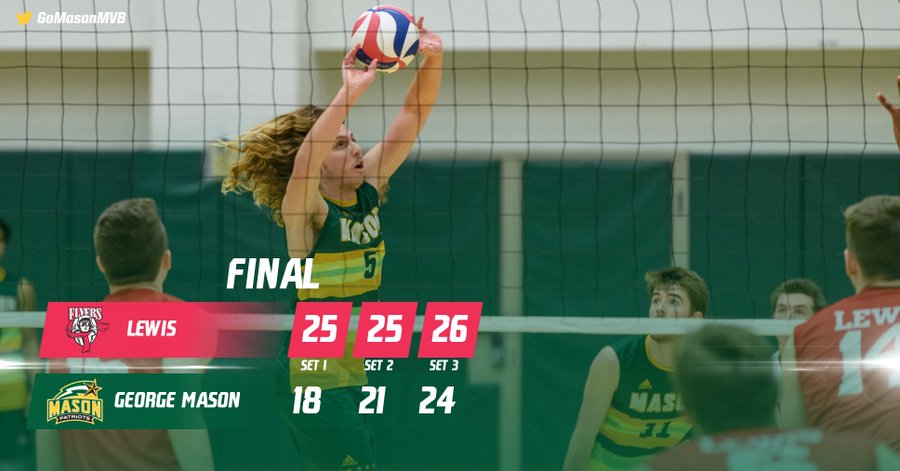 Mason moved up to #11 in the country:

Mason dropped to #13 in the country:

Mason dropped to #15 in the country:

"The Eastern Intercollegiate Volleyball Association (EIVA) announced its three 2020 inductees into its Hall of Fame on Feb. 21, 2020, and each represents a distinctive era of the game.

Andy Fishburn of Yale, Penn State’s Jason Kepner and George Mason’s Shaun Powell have all earned enshrinement in the ninth class of the Hall of Fame, honoring those who have helped build and shape the game through 48 seasons of eastern volleyball. In addition to their successes on the college court, all three have continued to make major contributions to the sport.

'Like so many of our current Hall of Fame members,' EIVA President Ron Shayka said, 'this year’s class not only had outstanding collegiate careers, they all continued to add remarkable accolades to their volleyball legacies after college.'

The three men will be honored during the NCAA National Collegiate Championships, which will be held May 7-9 at George Mason’s Eagle Bank Arena.

Fishburn played two seasons of volleyball at Yale, during a brief time in which the program was elevated from a club to varsity status as part of the Eastern Collegiate Volleyball League, the forerunner of the EIVA. Fishburn was a member of the 1975 Bulldogs team that was so successful during its club season that it was given varsity status right before traveling to UCLA’s Pauley Pavilion for the national semifinals. Yale, with just nine players and no head coach through the season, lost to UC-Santa Barbara in the semifinal match.

Fishburn played his final two seasons at Stanford, then made his name on the beach. He played professionally on tour from 1977-85, earning 21 tournament titles with three different partners and appeared in over 50 finals, winning world championship titles in 1980 and 84. He was inducted into the California Beach Volleyball Association Hall of Fame in 2003.

Kepner was a freshman member of the first volleyball program from outside California to win a national championship, with Penn State in 1994. He worked his way to second-team All-America honors from Volleyball Magazine and the American Volleyball Coaches Association in his senior year of 1997, and remains in the top-15 in the Nittany Lion record book in kills (1,249, 13th), attacks (2,443, ninth), digs (693, seventh) and aces (88, 10th).

He went on to train with the U.S. national program, played in the World University Games and spent time professionally overseas before stepping into coaching. Kepner just completed his 13th season as the head coach for the women’s team at the College of Charleston. He is the program’s all-time wins leader with a 295-134 record, guiding the Cougars to five NCAA tournament appearances and either sharing or winning outright eight conference titles. He also was inducted into the Pennsylvania Volleyball Hall of Fame in 2004.

Powell was a standout athlete at George Mason who remains high on several program record lists. His 1,537 career kills is tops the rally-scoring era for the Patriots, and is sixth across all eras. His 4.19 kills per set is best in the rally-score era, and his 102 career aces are tied for fifth all-time. He was first-team All-EIVA in 2005 and 06, the 2006 EIVA Player of the Year, and was an AVCA first-team All-American in 2006 after leading the team in kills, kills per set, digs and aces.

After his time with the Patriots, Powell played professionally for three seasons in Denmark and Germany, and even coached a youth team in Denmark. He returned to his native Toronto, Canada, and is now technical director for the Titans Volleyball Association, while also coaching one of the club program’s girls’ juniors team."

Mason remains #15 in the country:

The Nittany Lions will face the No. 15 Patriots in the main gym Friday evening at 7 p.m. before hosting the Golden Eagles Saturday night in the south gym, also at 7 p.m."

MASON VICTORY! The Patriots take care of business in four sets against the Red Flash. #WeAreMason 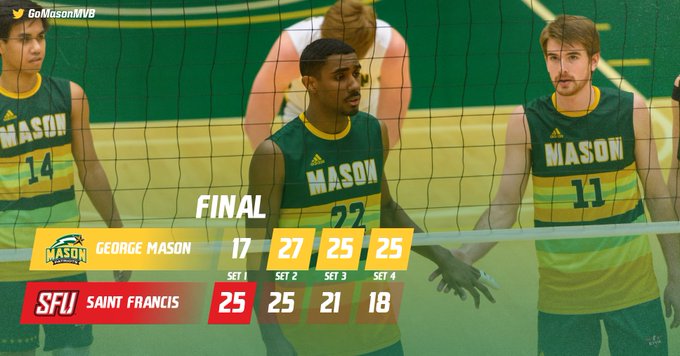 Mason remains #15 in the country: 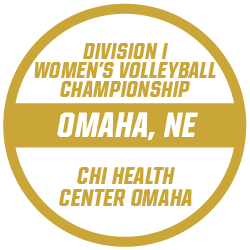 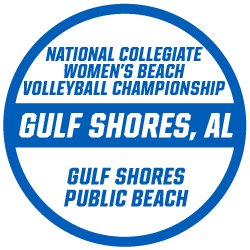