Mason Women's Soccer ‏@MasonWSOC
MASON GOAL FOR THE WIN! Off a corner, Abby Downey heads it in for the 3-2 victory!

Game was at Univ of MD Baltimore County.
OP

Overall record is 4-3, next game is at ODU on Friday night. The next home game is on Oct 8th.

Kevin McNamee ‏@kwmcnamee 5h5 hours ago
On to the A10 Tournament and a rematch with the other George. #theyallmatter 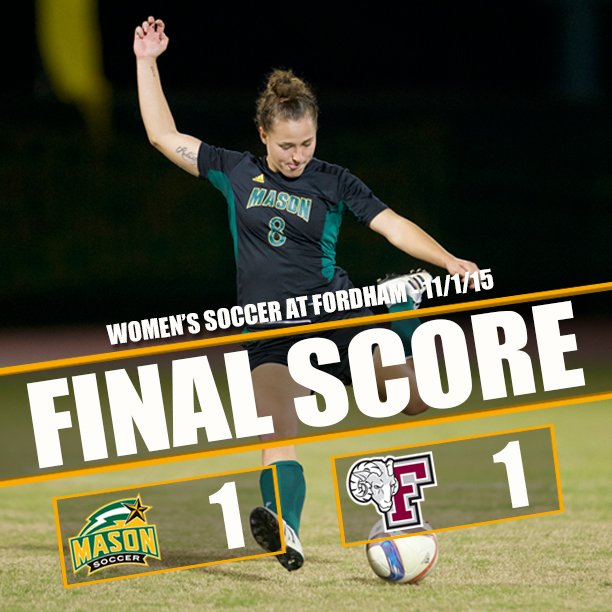 They beat #1 GW in the 1st round of the conf. tourney, 1-0, they will play the winner of VCU/Fordham tomorrow night.


Very cool!!!! Does this result count as double points in the Revolutionary Rivalry?
OP

Elbeck gave Mason (6-3-0) the win when she scored on a header from six yards out off of a crossing pass by junior Erin Mitchell. Elbeck, who scored two goals in 15 games last season, is tied for the second-most goals on the team this season with three.

“Our momentum was going and we were doing well going into overtime,” Elbeck said. “We knew we were going to be the team to put it in the back of the net. It came down to the wire and I saw the cross coming and knew I had to put something on goal.”

With the Patriots trailing 1-0 late in regulation, Mitchell sent the game to overtime when she scored from a sharp angle on a rebound off of a shot by junior Kaila Williams to tie the game 1-1. The goal in the 89th minute found the back of the net with only 23 seconds left in regulation.

The Patriots showed a never-quit attitude against a UNCW team that has been ranked first in the NSCAA Mid-Atlantic Region rankings for the last four weeks.

“That’s something that we have been trying to make one of our qualities that we have in our program,” Mason head coach Todd Bramble said. “That certainly was on display tonight.”

After a scoreless first half, UNCW (5-2-1) jumped out to a 1-0 lead early in the second half. Junior Savannah Andrews notched her first collegiate goal in the 48th minute, scoring off a free kick from 35 yards out.
OP

FAIRFAX, Va. - The George Mason women's soccer team enters the Atlantic 10 Soccer Championship as the fourth seed and will play No. 5 seed Fordham in the quarterfinal round on Thursday at Rhode Island's Soccer Complex in Kingston, R.I. with kickoff scheduled for 8 p.m.

The Patriots and Rams each finished with 19 points in conference play. Mason won the tiebreaker based on head-to-head results with common conference opponents to earn the higher seed.

Mason (12-6-1, 6-3-1 A-10) will face Fordham for the second time in as many years in the Atlantic 10 Championship. The two teams met on Sunday in the final game of the regular season, playing to a 2-2 double-overtime draw at George Mason Stadium.
OP

After being hired in March of 2015, George Mason head coach Todd Bramble has been on a mission to keep home-grown talent local and the results speak for themselves with five Prince William County standouts taking their skills just up the road to Fairfax instead of elsewhere.

“There are very few regions as rich with soccer talent as Northern Virginia,” Hilton said.

All five liked George Mason for a number of reasons. It was close to home. The Patriots showed the most interest of any college. And it offered academic majors they were interested in. The fact they could all play together was an added bonus.

The Lees were the first to commit to the Patriots. GMU had scouted Shannon since the eighth grade, but the twins didn’t begin the recruiting process until their junior year so they could first focus on academics, soccer, cross country and track.

The two were not intent on playing together in college, but after a visit to George Mason in late October of 2015, they were impressed by Bramble and his staff’s vision for the program. They also toured the facilities and studied up on the history of the women’s program.
OP

Wow! Very impressive! To go through what she has at such a young age and still have a positive outlook is special.
OP