In an attempt to have more positive news about our athletic department on here, the women's lacrosse team is on a five game winning streak, having just beaten Presbyterian 15-9. They are currently 5-2.
OP
G

With a 14-13 win over Campbell, women's lacrosse is now 6-2. Their game against Marist was cancelled due to snow.

They will be the #2 seed in this week's 6-team Atlantic 10 tournament, earning an automatic bye into Friday's semifinals. #1 seed UMass is the seven-time defending champion, and hasn’t lost an A10 game since 2010.

The Patriots will host eight contests at George Mason Stadium and hit the West Coast for a two-game California swing in February.

'We have put together another challenging schedule this year,' Morgan said. 'I believe that the strength of our non-conference schedule prepared us for the challenges of the A-10 last season. My hope is to continue to build on that progress. We still have a huge hurdle to get over but this year, but we have a wealth of experience and we couldn't be more excited for the season to start.'

Mason opens the season with three-straight home contests, beginning with the contest against the Terrapins on Saturday, February 8. Maryland went 22-1 last season en route to the program's 15th national championship in May."

" ABOUT THE PATRIOTS
Mason is coming off an outstanding 2019 campaign in which the Patriots tied program records for A-10 wins (7) and A-10 Championship seed (2). Led by Morgan, the 2019 A-10 Coach of the Year, the Patriots return 10 of 12 starters from last season's team, including A-10 Rookie of the Year Deanna Balsama and First Team All-A-10 selections Melissa Semkiw and Erin Donoghue."

"FAIRFAX, Va. – George Mason University Vice President and Director of Athletics Brad Edwards announced Monday that women's lacrosse head coach Jessy Morgan will complete her stint as head coach of the program at the conclusion of the 2020 season.

Morgan will move on to serve as director of athletics at her alma mater - Garrison Forest School in Owings Mills, Maryland."

"Morgan recently wrapped up her fifth season as head coach of George Mason. The 2019 Atlantic 10 Co-Coach of the Year led Mason to an outstanding campaign in which the Patriots tied program records for A-10 wins (7) and A-10 Championship seed (2).

Morgan has compiled a record 55-33 as head coach of the Patriots. The program's 45 wins over the past four years are the most in a four-season stretch in school history."

During the fall 2019 semester, women's lacrosse student-athletes posted an impressive combined 3.62 GPA. That high mark comes after leading the department in both the fall 2018 and spring 2019 semesters." 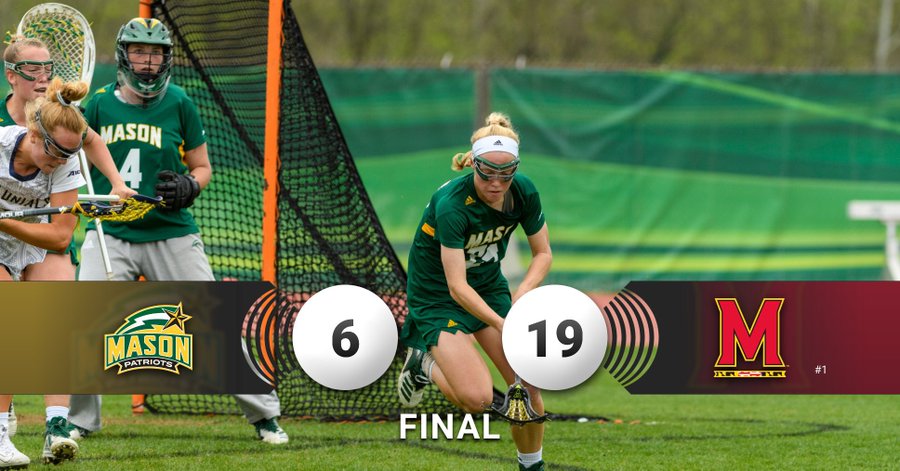 Mason back in action on March 4 at #7 Virginia

UVa gets hot in the second half, but great effort by the Green & Gold.

Mason back at it Sunday at San Diego State

We got a new head coach: https://gomason.com/news/2020/5/26/kara-mupo-named-head-coach-of-mason-womens-lacrosse-program.aspx
M