In continuing the trend of non-revenue sports having great seasons relative to recent history, the men's wrestling team has 5 guys that are likely to qualify for NCAA tournament. Last year we had 3, and we typically only have 1 or 2.

Anthony at 149 and Voss at 285 are both seniors went to NCAA Tournament last year and advanced to the 2nd day of the Tournament (64 man bracket, double elimination). Voss is currently undefeated, has beaten two nationally ranked wrestlers and is up to #8 in the country - he has a legitimate shot at all american.

Freshman Kolby Ho at 157 is having a phenomenal season and recently defeated the nationally ranked defending conference champion by major decision. He is a potential 4 time NCAA qualifier and future all american - can't remember a true freshmen having a start to their career like he has this season. Most of his wins are dominant wins, looking forward to seeing him this Saturday.

The other two guys having great starts and will potentially qualify for NCAA's are Diblasi at 165 (Big10 transfer) and Spencer at 197.

Next year I believe we will also have an ODU transfer eligibile (Madrigal), who qualified for the NCAA tournament last year, coincidentally losing to Anthony, whom he will likely replace next year.

We have a couple other freshman too (Ortiz at 133, Feight at 149, and Pierce at 184) who are all taking their lumps right now but have bright futures, in addition to an incoming freshmen who is currently ranked #8 in the Country in his weight class.

Don't recall the team ever being this competitive and talented across the Board, and they are young.
Last edited: Dec 6, 2018
M

Thanks for the info, JS. This is one of the things I miss with Pablo's absense on the boards. He provided information on other teams especially wrestling.
OP
G

My apologies for jinxing the team against Buffalo today, Ortiz lost after leading 10-4, 4 matches went to OT and we lost every single one, including #8 and previously undefeated Voss (he was wrestling the #15 ranked Heavyweight).
OP
G

Mason's top 5 wrestlers had a very impressive showing at the prestigious Southern Scuffle tournament, led by Voss at heavyweight placing fourth. Voss defeated the #7 and #17th ranked wrestlers, with his only two losses coming to two wrestlers from PSU, one of which is the current #5 and and a pt loss to last years 7th place/All American.

Freshman Ho at 157 had his tournament ended first with a close loss to #14 (was 5-3 with a few seconds left before giving up a last second takedown).

Diblasi (165), Anthony (149) and Spencer (197) all finished just shy of placing in the top 8 with very close loses, mostly to Nationally ranked wrestlers. Anthony in particular relatively dominated his match against the 7th ranked wrestler, but gave up a few cheap back points that ended up being the difference in the match.

All of their performances show that they have all improved throughout the year, should all be legitimate contenders to not only qualify for, but make some noise in, the NCAA tournament; with Voss showing he is a legit contender for All American (top 8).

We lose Anthony and Voss after this year, but are bringing in an ODU transfer who is a prior NCAA qualifier, and two freshman who are ranked in the top 20 among High Schoolers at their weight class, both of which will likely be day 1/4 year starters.

Coach Beasley and his staff are using their recruiting connections in PA to build a formidable roster and this team could go from having 1 or 2 national qualifiers each year to being a legitimate top 25 team, as early as next year.
OP
G

I think Ho, Diblasi, and Anthony remain in strong position for at large bids.
OP
G

The first NCAA Coaches' Rankings were released this week, ranking 33 wrestlers in each weight class.

Mason has three wrestlers in the rankings, with Voss ranked 12th at heavyweight, DiBlasi 24th at 165 pounds and redshirt senior Tejon Anthony 28th at 149 pounds.

Voss just earned a major decision over the #29 ranked Heavyweight, and now has defeated in the last year the current ranked #11, #14, #18, #19, #24 and #29 (with losses to #3 and #13) and has two remaining matches against ranked wrestlers (and possibly another in the EWL tournament).

But the big one, and the only one against someone ranked higher, is Feb. 17th at home vs. Maryland against #6 Youssif Hemida from Maryland (he was an all-american last year after finishing 8th at nationals).

A win over Hemida has the potential to put him into the top 10 which will be hugely important to set him up for a shot at earning all-american status with a top 8 finish at nationals.
Last edited: Jan 29, 2019

Somewhere, Pablo is smiling at this move!
G

mason89 said:
Somewhere, Pablo is smiling at this move!
Click to expand...

Is Penn State in that conference, too?
OP
G

GMUgemini said:
Is Penn State in that conference, too?
Click to expand...

No they are Big10, thank god
G

Joe Shannon said:
No they are Big10, thank god
Click to expand...

Yeah, they are a beast of a program. I was asking because I know he is a PSU alum.
M

He was a huge wrestling fan, though.
G

mason89 said:
He was a huge wrestling fan, though.
Click to expand...

Makes sense. My dad is a Penn State alum too and he went to football in the fall and wrestling (instead of basketball) in the winter. I think their wrestling team averages at least the same if not more per match as the basketball team does.

"CLARION, Pa. – The Patriots wrestling team opened its dual match season with a familiar opponent but in a different conference as Mason edged the Clarion Golden Eagles, 19-18 today at Tippin Gym on Clarion's campus.

The two teams met five of the last six seasons in the Eastern Wrestling League before meeting today for the first time as members of the Mid-American Conference. The Eagles won the last three dual matches with Mason last winning on January 18, 2015 at Clarion.

'Two years ago, Clarion shut us out in the dual,' said Head Coach Frank Beasley. 'Last season they beat us 16-27 and this year we came away with a big win. I think Clarion's line-up today was the best team they have fielded in a long time.'

A solid win for Mason, the Clarion Golden Eagles were ranked fifth in the preseason MAC coaches' poll, while the Patriots were sitting at 13th in the 15-team conference."

"'Real development takes time,' added Beasley. 'I'm very proud of our team for the effort they displayed today, and it was a very solid performance. I think a big portion of the credit goes the assistant coaches on this staff who have helped develop the young men within our program.'

UP NEXT
The Patriots to open its home schedule against Oregon State on Thursday, November 21 at 7 p.m."

GMUgemini said:
Makes sense. My dad is a Penn State alum too and he went to football in the fall and wrestling (instead of basketball) in the winter. I think their wrestling team averages at least the same if not more per match as the basketball team does.
Click to expand...

If true, that's surprising but not shocking. Cael Sanderson has turned that program into a monster. 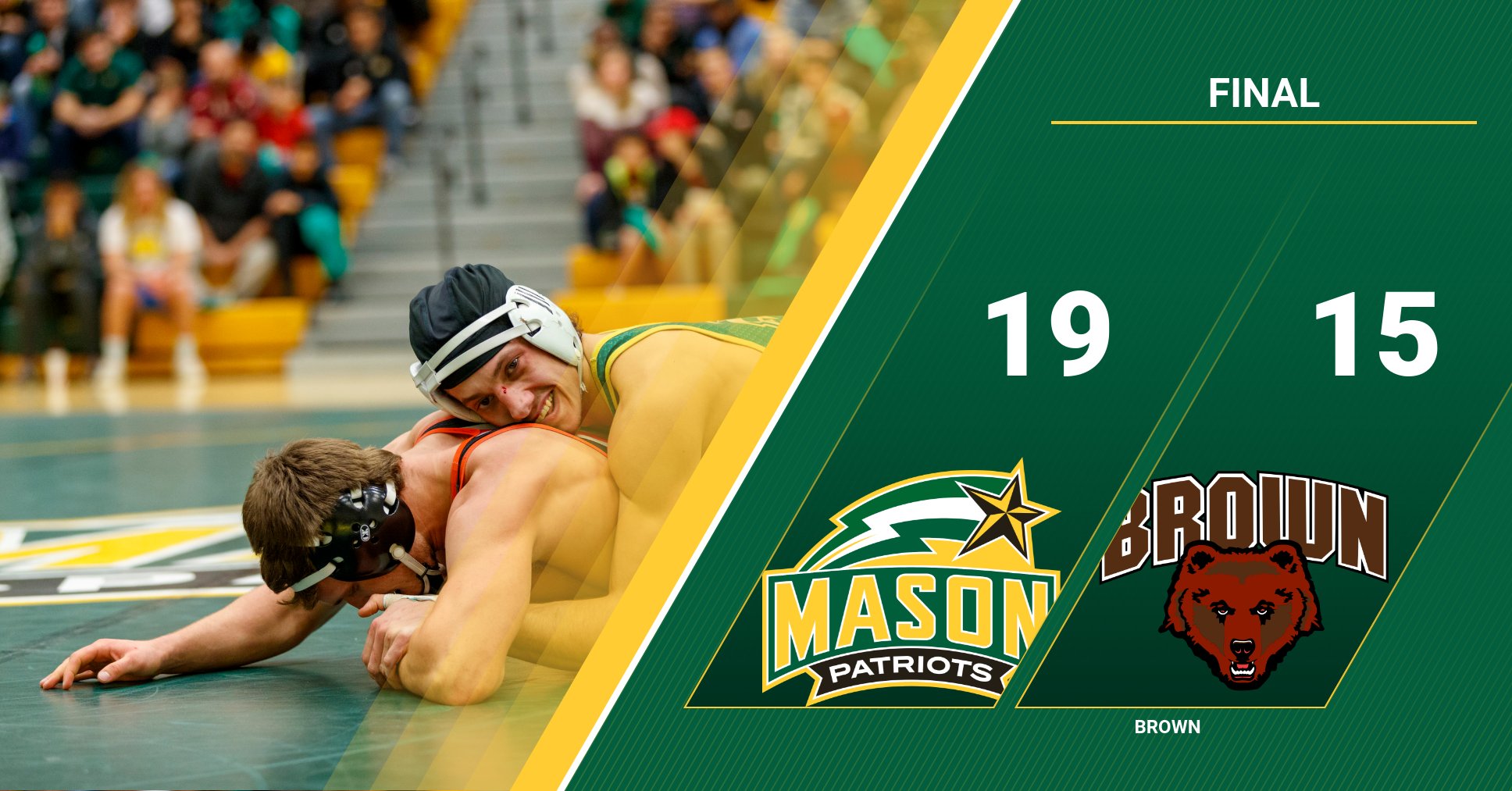